I’ve been meaning to write about rune castings and rune readings, as well as understanding the runes, but I’ve had no time. Or less than no time. Because of this, I’ve been sort of remiss in my duties as The Rational Heathen, as it provides good content. Nevertheless, I’m going to start off talking about the runes and try to get at least one rune covered every other post.  That’s my intent. I’ll see if I can really talk about the 24 runes and how they came about. Let’s begin.

The Story of Odin Hanging Himself on Yggdrasil

If you haven’t read the Havamal where Odin sacrifices himself to himself to gain the knowledge of the runes, here’s the translation:

137.
I trow I hung on that windy Tree
nine whole days and nights,
stabbed with a spear, offered to Odin,
myself to mine own self given,
high on that Tree of which none hath heard
from what roots it rises to heaven.

138.
None refreshed me ever with food or drink,
I peered right down in the deep;
crying aloud I lifted the Runes
then back I fell from thence.

Wow, pretty powerful stuff there. You might even notice the similarity to Christ’s crucifixion. I’ll touch on that another time, perhaps. T

he story, if you haven’t gleaned it from the Havamal is that Odin hung himself on Yggdrasil for nine days and nine nights to get the runes. He offered himself to himself as a sacrifice. When he finally saw the runes, he took them and brought them to the gods and us humans.  Pretty cool, right?

The Elder Futhark is the oldest version of our runes (there are other sets, and I will talk about them later) dating somewhere to the first or second century CE or AD. I’ve written about their origin here. It’s believed that the Germanic peoples based their runes on the Italian alphabets, most likely either the Northern Etruscan or Raetic alphabets. They may have been based 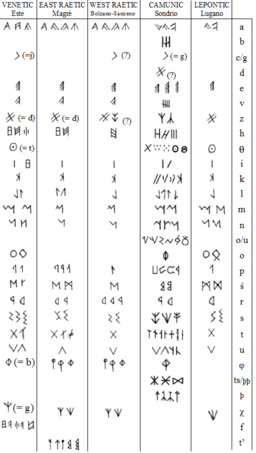 on the Latin alphabet, but given Raetic has several rune-like characters, it’s likely the Germanic peoples adopted the alphabet and then made it their own, sometime even before the Roman Empire was in full swing.  The similarities between our Latin alphabet and the runic one  is too hard to ignore, so despite the verses in the Havamal explaining how Odin won the runes, we think it was more an assimilation of an alphabet created by someone else. The Etruscans and the Raeticians may have gotten their alphabet from the Greeks and Phoenicians, so it’s all good. Basically we’re dealing with an ancient alphabet founded on an even more ancient alphabet, and so on.

Where’s the Magic in a Derived Alphabet? (Or Understanding the Runes)

At this point, you may be wondering how we could possibly get magic out of a derived alphabet. Understanding the runes requires understanding their origin and what they actual do. The runes are considered sacred not only because of the myth that they were given to us by Odin but also because of what they do. They convey our thoughts and words, allowing us to talk not just to others around us but also to generations to come long after we’re gone. They have a special power to convey ideas across time and space. If that’s not magic, I don’t know what is.

So, what happens when you do a rune casting? I think it is something that connects with your subconscious and gives you advice when you cast them. I also get the feeling that the gods also give advice through the runes. I’ve seen it before, so even though it’s Unverified Personal Gnosis time, I truly believe this. I also know others have had a similar experience.

You can cast runes anywhere, but it really helps if you have someplace quiet to do it.  You can cast it on anything, but I like using a special cloth–in this case, a bandana with wolves printed across it–to cast on. There are several different spreads to cast on, the most notably being the one rune, three rune, Teiwas shoat, nine rune, and the tarot cast. All work okay, but for simplicity sake, I use the three rune combined with one rune.  I’ll go through that later. The choice of rune casts are really up to you. Just make sure you understand the cast positions and what they mean. before doing the cast. For example: I can never remember what the positions mean in the Teiwas shoat, having not cast it enough. I gives me answers, but not necessarily clear answers because it’s muddled in my brain. That doesn’t mean it won’t work for you. (But you’d think a follower of Tyr would have better luck with it.) It’s better to go with something you know well, if you’re doing a formal cast. Just my opinion; your mileage may vary; not valid in all states; yada, yada, yada.

I’ll start in on the runes and tell you both the common interpretations and my own insights. So, hang in there. (Heh! Pun intended, Odin!)

Did you know that my patrons at Patreon got to see this post before you did? Yep, one of the perks of being my patron. You can be my patron for just $1 an original post, plus get the insider track on what you’d like to see more of. Be a patron of mine at Patreon and see more cool posts like this one.

Runes as a Divination Tool

Which Runic Alphabet Should You Choose for Casting?