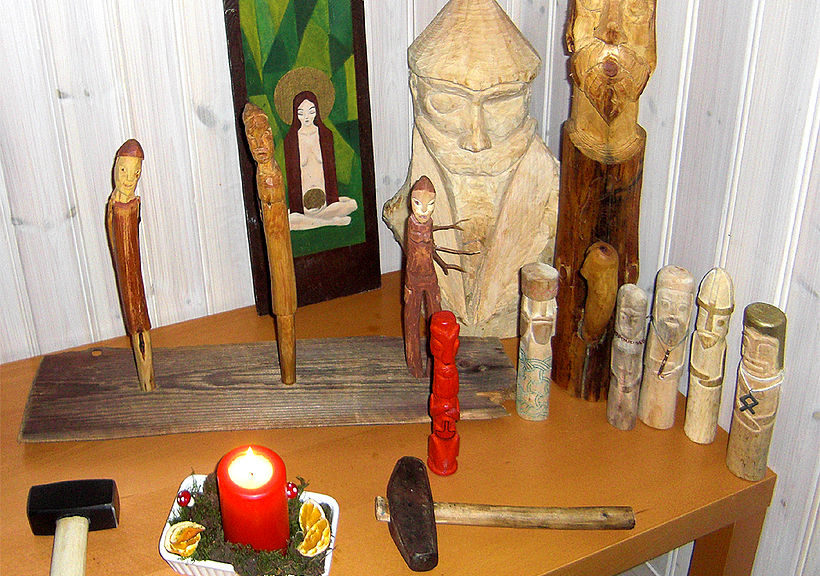 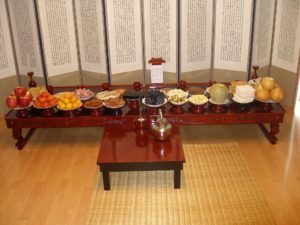 One of my readers asked me to cover how to create an altar. It surprised me a bit, because while I do have an altar, you don’t have to have an altar. I tend to use my altar for offerings and to hold objects I deem sacred to me and to the gods.  Many Heathens, myself included, have done just fine without an altar for a long time. That being said, many Heathens have altars so that they may have a place to leave offerings, to pray, and to keep things sacred to them, such as their runes.

Your altar doesn’t have to break the bank — you can go elaborate or not. And you can choose what belongs on your altar. If the primary purpose for your altar is to honor the gods, that’s great. If you honor the wights on the altar, fantastic. Honoring the ancestors is good too. And, if you honor all three or a combination of the three, that’s perfectly acceptable.

Where to Put Your Altar

Your altar can be anywhere in your house where you are. Most people clear off a shelf or a small table to put their sacred objects on. Some people use a shelf or two in one of their bookcases, which is also very useful. Whatever you do, be sure to use that space only for your altar and nothing else. Sure, if you have a bookcase, you can have other shelves filled with books or whatever, but the altar should be considered a sacred space.

If you don’t have something that will work for an altar, you might need to buy an end table, coffee table, or bookshelf. If you’re strapped for cash, consider going to secondhand stores and yard sales. Get on freecycle and ask someone to donate a small table or bookcase for your needs. Where I live, entertainment centers that housed tubed TVs are no long in fashion since flat-screen TVs and are available dirt cheap or even free. Do some looking around and you’ll probably be able to score one. Those entertainment centers are just the ticket for an altar.

What to Put on Your Altar

A lot of people put statues of their gods, Mjolnir, and other symbols which remind them of their gods. If you’re honoring certain ancestors, you probably want to include photographs of the

person you want to honor, if you have one. If not, maybe a certain thing they gave you, or maybe something that reminds you of them. Honor the wights in your area, by including a small rock, dried leaf, or even a pine cone or piece of a branch can symbolize the wight or wights you wish to honor.

If you can’t afford statues of the gods, or you haven’t found a statue that suits you, you can always create your own drawings, or if you’re not that artistically inclined, pick up things that remind you of the god. For example, you may want to have an image of a horse for Odin (Sleipnir)

You should definitely put your runes there as well as the cloth that you cast them on. You will also want to have bowls on the altar to put offerings in.

Creating Your Own Runes

If you don’t have runes, they’re pretty easy to make. You can make some easily by choosing interesting pebbles or small rocks and mark or paint the runes on each of them. You’ll need 24 for the Elder Futhark runes. If you do go this route, buy some varnish or clear coat to ensure that the markings stay on them. Since you’re using permanent markers, you can get pretty wild with the colors, including metallic ones. If you’re more craftsy than I am, you can make your own wood runes out of a tree branch that has been cut into 24 pieces. Burn the runes into the wood and shellac or clear coat them to preserve them. I’ll cover more rune ideas in a later post.

The reader who asked me to cover creating an altar told me about how a group of so-called Heathens told him that he wasn’t Heathen unless he only honored the ancestors. Baloney. Heathens honor the gods,–including the gods who are most special to them–the wights, and even the Jotunn. While many Heathens find help directly from their ancestors and wights, many other Heathens honor the gods, especially those gods who have aided them. If you’re new to Heathenry and you’re not sure which gods you should honor, go with those gods whom you relate to best. For example, Odin, Thor, Heimdallr, and Freyja may have piqued your interest. If so, plan on adding something to your altar that will remind you of them. Maybe you found a Christmas ornament in the shape of red skis. That could work for Skadhi or Ullr. I have a green stone with a golden fox on it. I have that for Loki, since foxes are known as tricksters.

How to Create Your Own Runes on a Budget