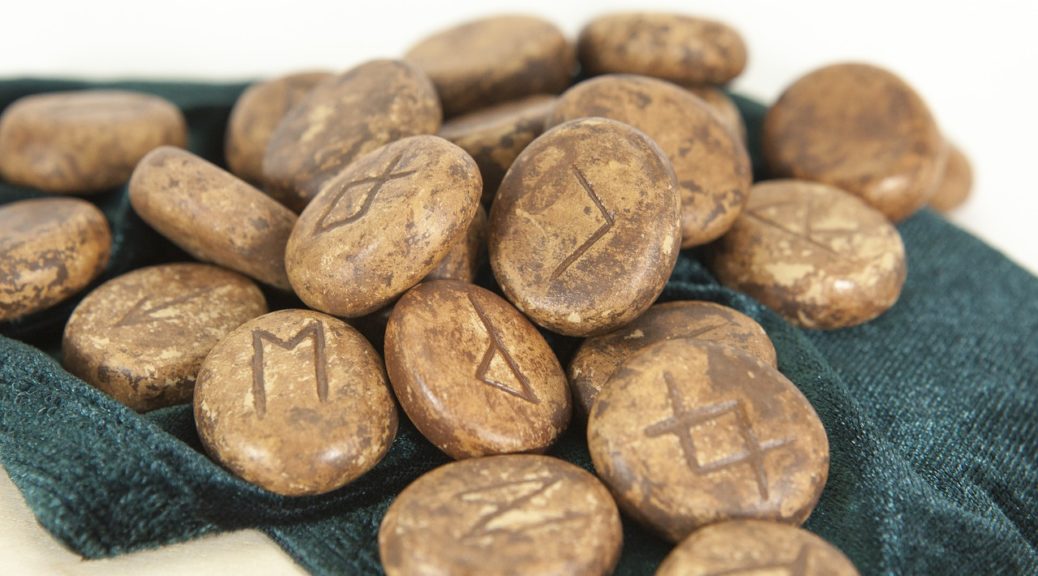 Our ancestors have used runes as divination tools for centuries. Whether fashioned from bone, wood, stone, or something else, people relied on runes as a written means of communication, powerful talismans, and a means of learning about the future.  I’ll explore why in this piece. 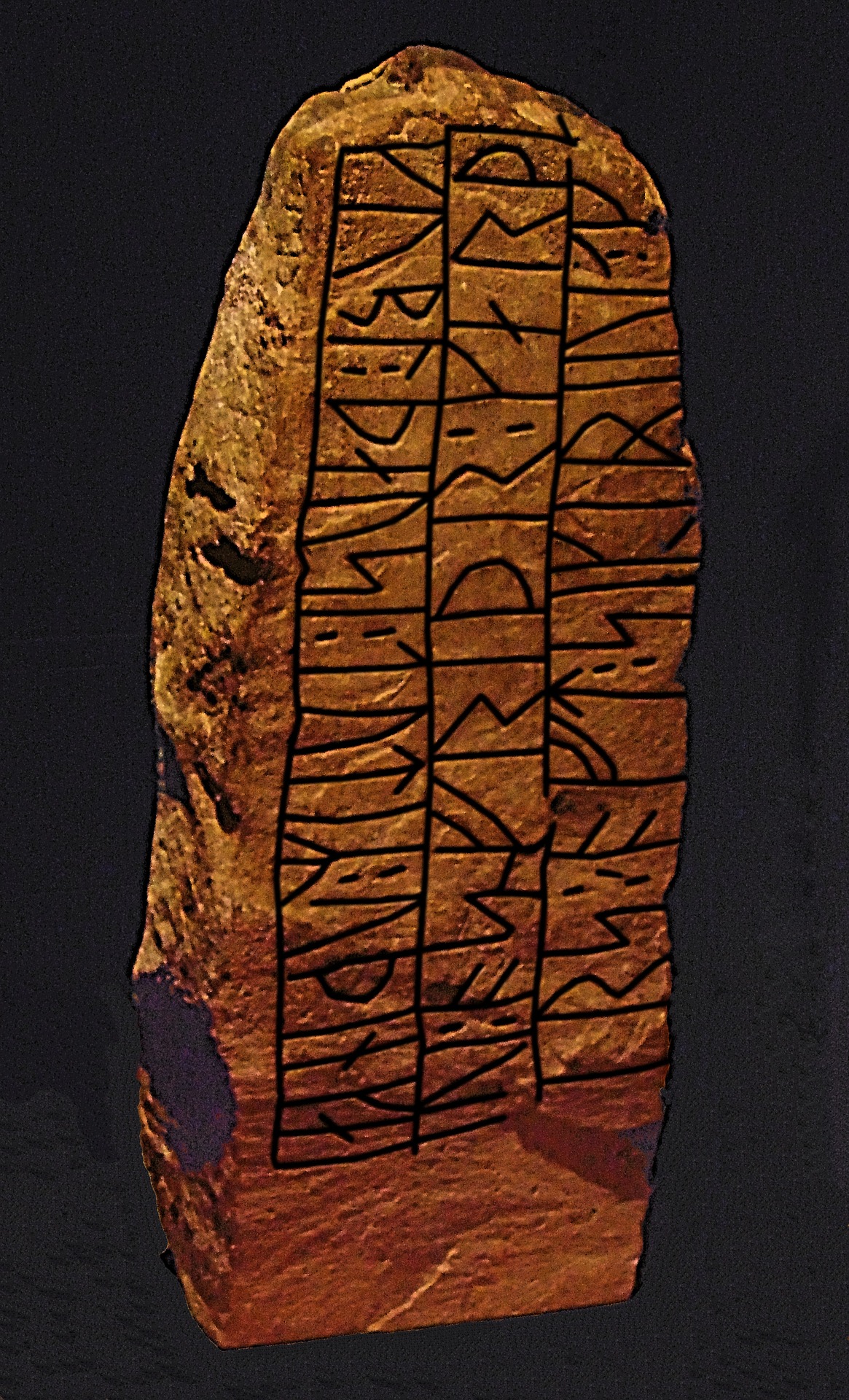 Runes — and writing, for that matter — is the human attempt at establishing immortality in a very mortal world. Look at the runic inscriptions we have from our ancestors: they talk about deeds, imbue power into weapons, mark the existence of a person, keep track of goods, or give us a magical formula of some sort.

Even today, humans want to leave their indelible mark on the world. Whether it’s a person who wants to be a published author, an actor appearing on the silver screen, a recording artist, an Internet blogger, or a tagger spray-painting graffiti on a boxcar, all these people are looking to achieve some sort of immortality. The Internet and movies are just another form of media that came from the written word.  Before writing all people had were their memories and oral traditions. Sure, the person learned the story from their parents and grandparents, but over time the stories morphed into something less recognizable by the original teller.  Like an ancient form of the kid’s game “telephone,” original details were lost and new information was added. Only when the stories were written down did we have a record of what the story was at the time it was written. That’s assuming, of course, that the scribe wrote it down word-for-word without embellishment, which generally didn’t happen.

The Magic of Writing

If you’ve been one of my long-time readers, you know I eschew the word “magic.” But in this case, I’ll 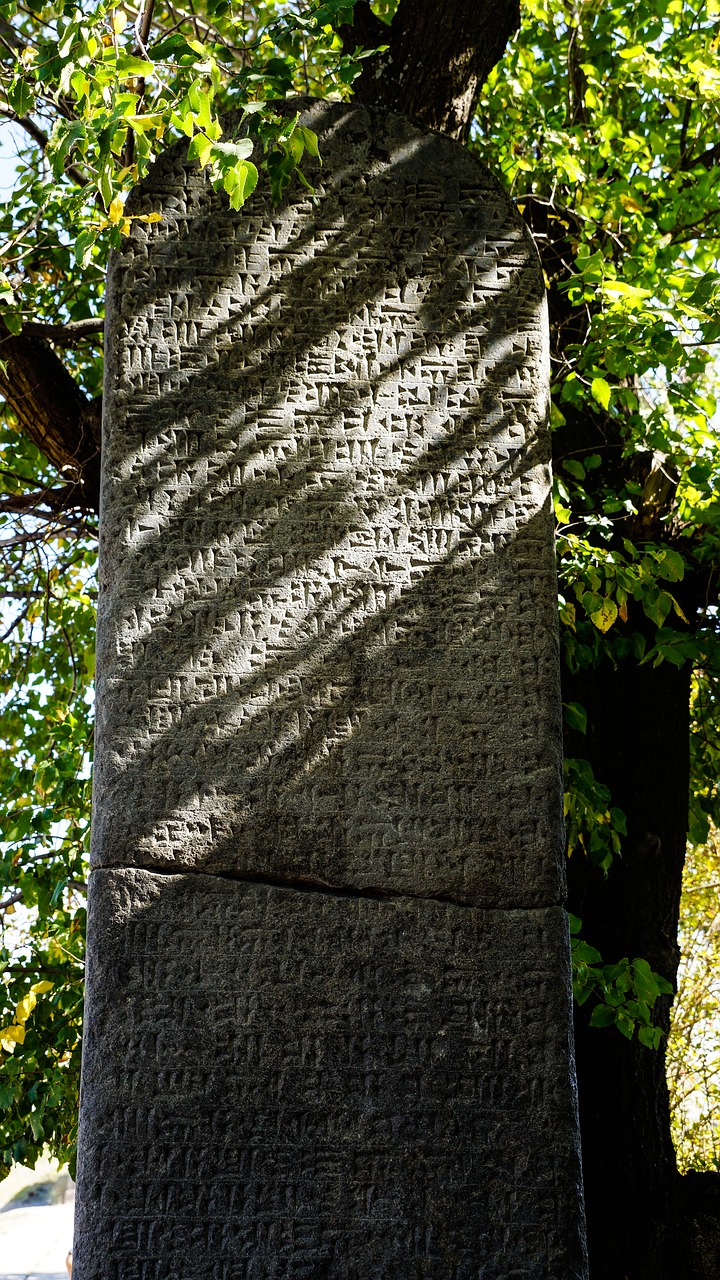 forego that avoidance. Writing, itself, is magical. Think about it.  We can convey our thoughts, stories, feelings, and beliefs to people we have never met.  To people whom we will never meet. This power is something we take for granted now, but writing has really only been around for a little over 5000 years.  The world’s oldest writing is cuneiform written in 3200 BCE. Scribes developed and used cuneiform to record transactions in the Sumerian city-state of Uruk, which is in present-day Iraq.

Agrarian societies invented writing to keep track of goods, possessions, and taxes.  Writing is a by-product of commerce, which makes sense.  Even Scandinavian/Viking merchants used runes to keep track of their goods.  I would argue that until produce and trade developed, humans had little need of the written language. Sure, there were magic sigils and marks, but until people exchanged money, or at least goods and services, they didn’t have a pressing need for a written language. 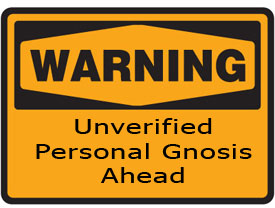 I believe part of the runes’ sacredness comes from the “magic” of being able to learn from people long gone from the world. How magical it must feel to hear the voice of an ancestor from something written.  The ancestor most likely carved the runes into something more permanent like rock, bone, wood, or metal. This lasted far longer than his or her 40 to 50 years in this world. 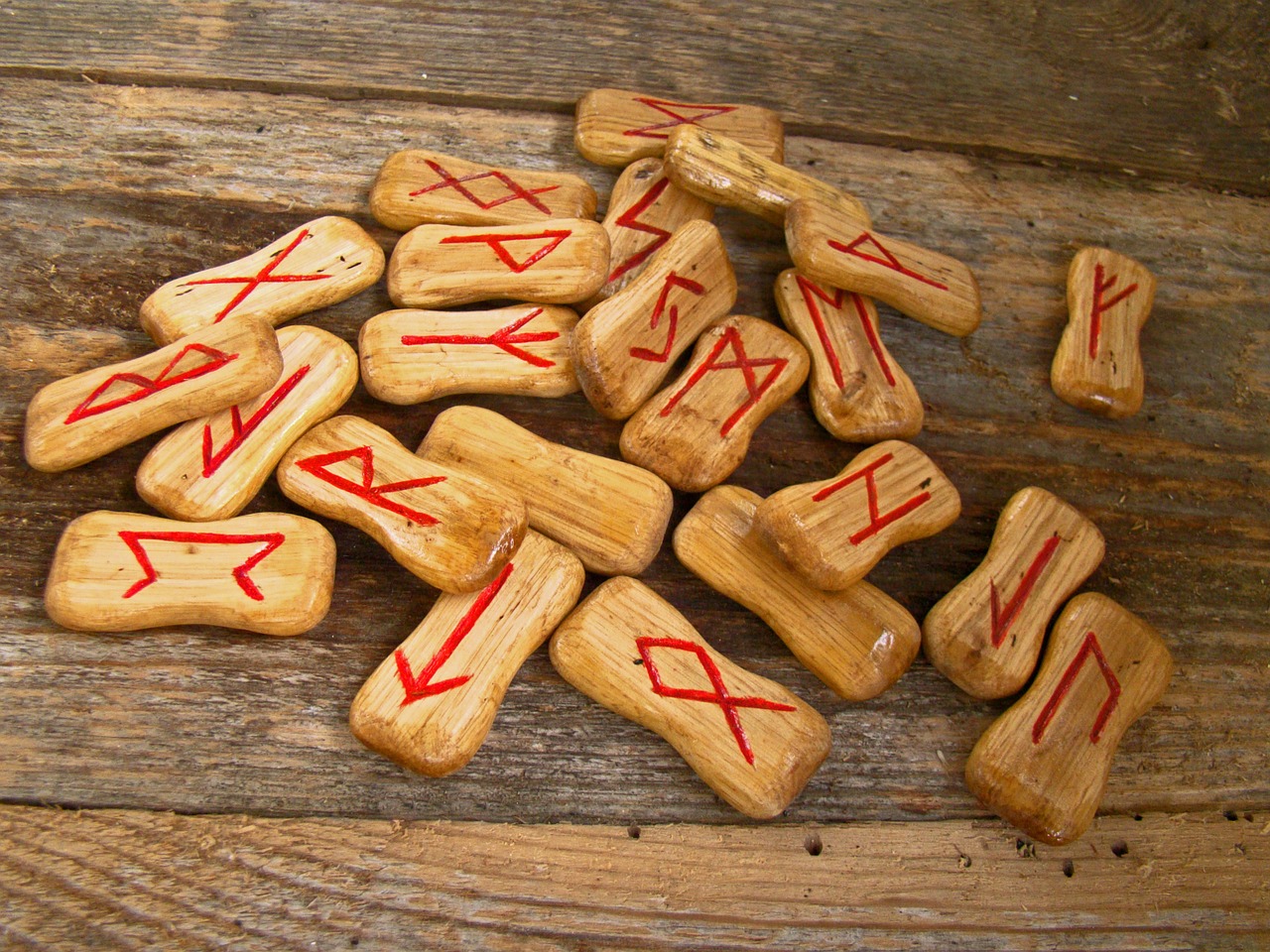 (At this point, I can hear purists who believe in magic screaming that I’m full of shit.  Cool. You don’t like what I say?  Bitch somewhere else.  You got the warning above; deal with it.)

Whether you believe that Odin gave our ancestors the runes or not is immaterial.  The runes are here and they possess a quality that we can use to explore our mind and our collective unconscious.  It may serve as a way to understand what our conscious minds haven’t grasped.  And it may be a way to know what is happening in the future. 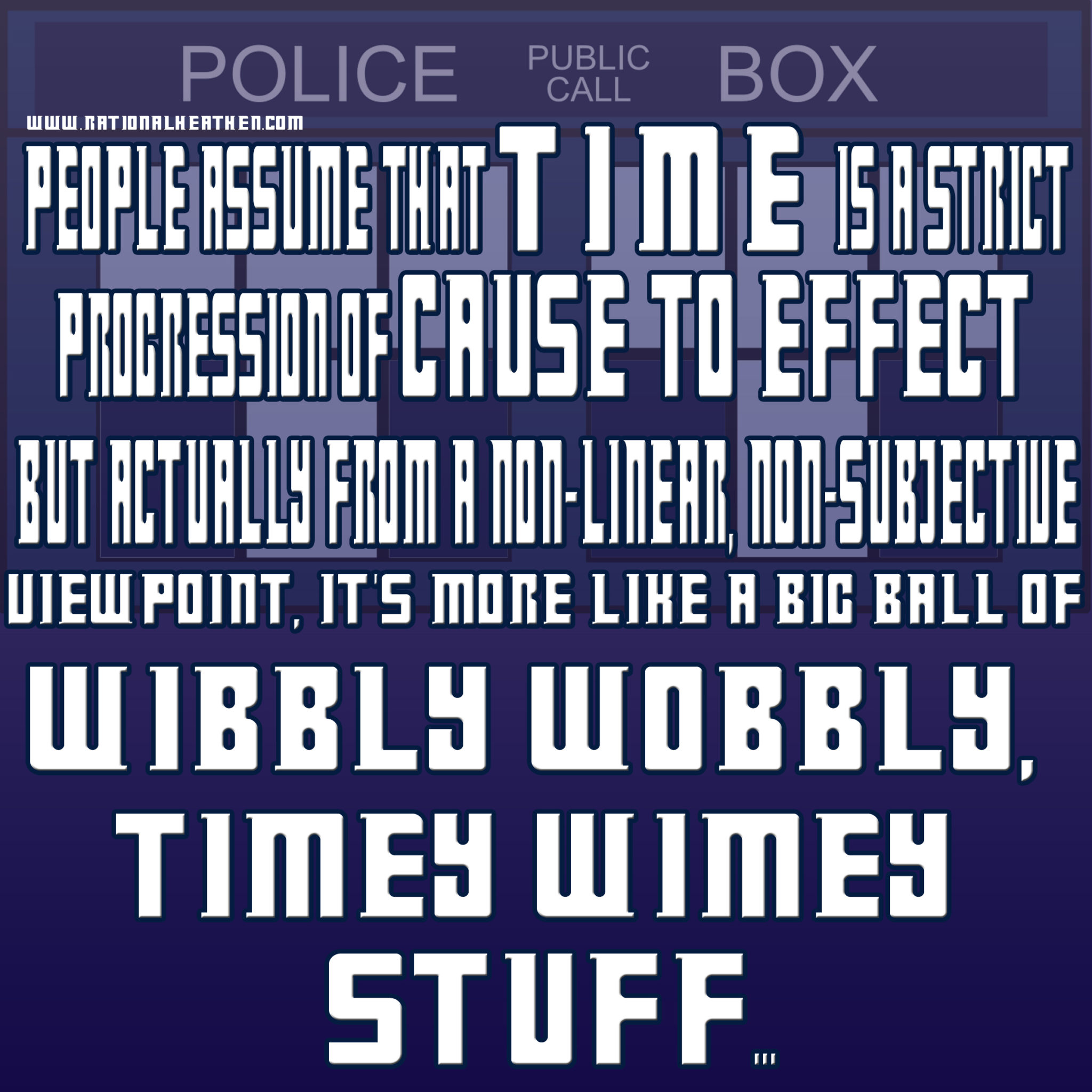 If you’ve read my piece about free will, I go into the block universe theory and why we may not have free will at all.  Briefly, the block universe theory in physics states that everything has already happened and it’s just our limited perception of time that keeps us thinking sequentially. The past, present, and future exist simultaneously.  Time doesn’t go forward, per se, we just experience it in our limited capacity as if a spotlight is being shown on that particular instant in our lives.

I wonder if people can and do access those other parts of space-time, just not consciously. As a Science Fiction and Fantasy writer, the thoughts are intriguing, certainly.  If we can access the past and future subconsciously, it makes sense that the runes help us do it.

My sister gave me a rune set and Ralph Blum’s Book of Runes when I was a teenager. I actually have a 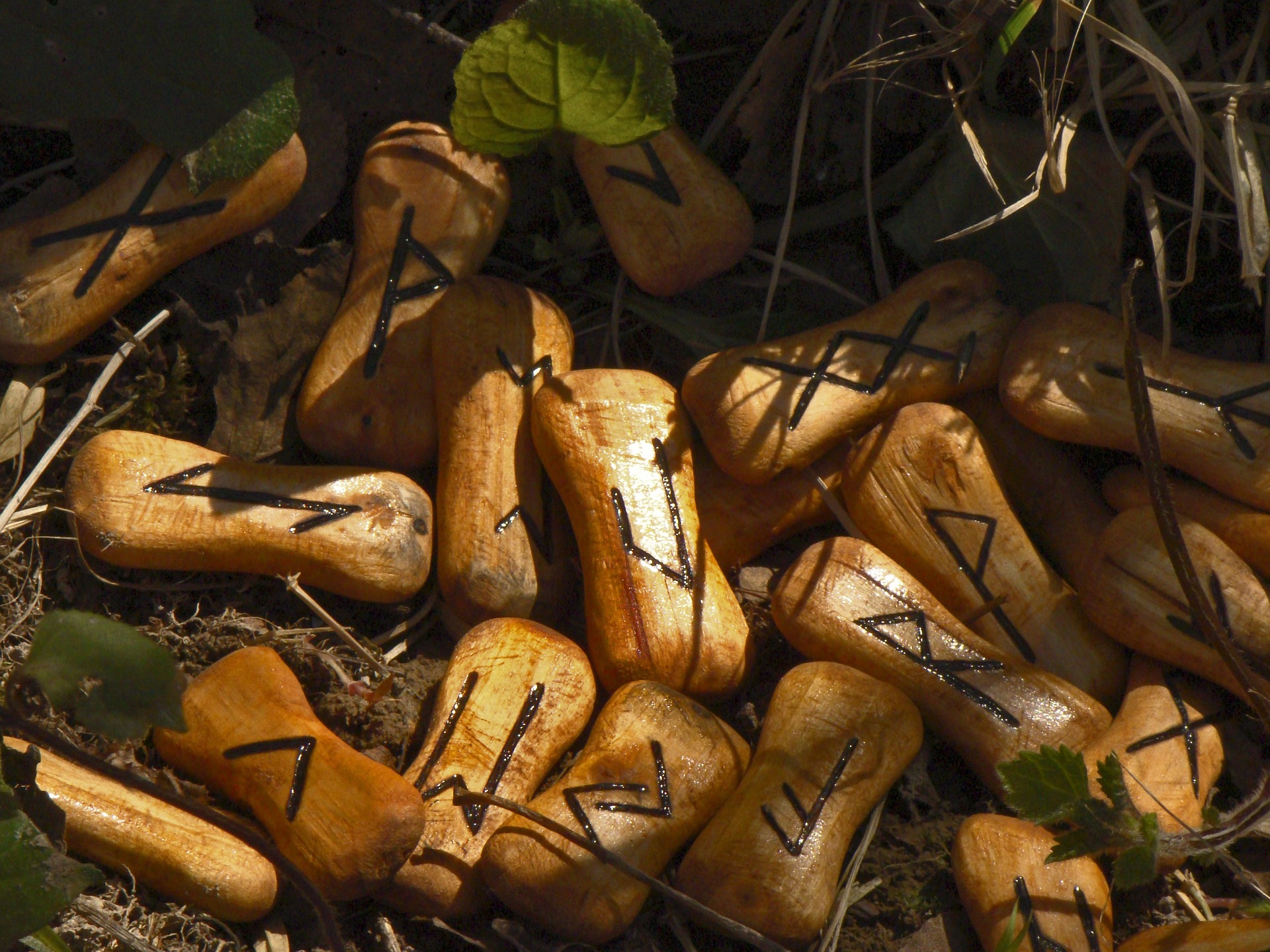 first edition somewhere, assuming it didn’t get lost in moving. Whether or not you think Blum’s book is a bunch of crap, you have to admit that it was and still is quite popular. I did some pretty successful runecasts with it, despite its faults.

That being said, because the runes are our gateway into reading into the future with our subconscious mind, my guess is you can have whatever interpretation you fancy and still get the reading right. (I can hear the purists screaming now.)  The main thing is to stay consistent in interpretation, otherwise it’s unlikely you’re going to have a good reading.  I prefer using traditional meanings over others, if , for no other reason than to have consistency.

I would say go with whatever works for you.  If merkstaves and blank runes work, then do it.  If going the completely traditional route works, then do that. Hel, if you find Ralph Blum’s interpretations work, then use those.  Let me know what works for you in the comments.