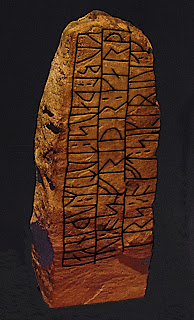 I really hate the M- word.  It suddenly puts Heathenry into the realm of Wiccan and other m(agic) based beliefs. It suggests that there isn’t a good reason why something happened.  And for the Rational Heathen, that drives me batty.

I’ve been accused in the past of being atheistic because I waffle on certain elements of our beliefs.  And yet, there are plenty of nonbelievers in the ranks of heathens, who don’t necessarily believe in the gods as people, but still wish to preserve the old ways.  And yet, I have had more encounters with our gods, and even the wights, than some of the staunch believers have.

So, when I talk about runecasting, understand that this is my interpretation of it.  It isn’t necessarily the only way to do it.  It’s not even the right way.  But it is my way and if you can learn some things from my methods, then terrific.

Before I get started on this, I don’t consider myself an expert in the runes. I know the Elder Futhark and I cast those runes. There are other runes that are equally valuable such as the Younger Futhark, the Anglo Saxon runes, and others.  None of them are inferior.  But unless you make yourself a set, or find someone who makes these runes, chances are the runes you’ll pick up are Elder Futhark.  Which is okay.  There’s a lot more written about them than the other runes, anyway. 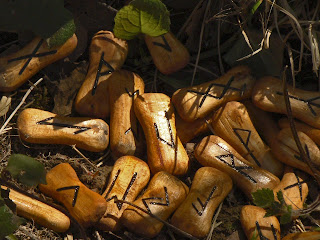 How I Got into Runecasting

My sister (who, weirdly enough is a devout Christian), gave me Ralph Blum’s Book on runes when it first came out when I was in junior high or high school (yeah, it was that long ago).  I dinked around with them throughout high school and college, not knowing what the Hel I was doing.  Even so, the runes had a tendency to give me consistent, true readings. As I started reading other rune material, I outlined the rules in my own mind, what the runes meant, and how to runecast.  Even now, I follow these rules when I do a runecast.

It works for me.  It may not work for you.

My Rules to Runecasting

These are my rules when it comes to runecasting.  Your Mileage May Vary (YMMV), and you probably have a method that suits you.

Choose Runes that Speak to You 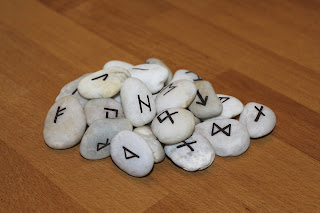 I’m not talking about actual speech here.  I’m talking about what feels right in your hands.  I have probably around 10 rune sets, some which I do not like or connect with.  There’s one runeset, a runeset made from hematite, that feels right in my hands. I have one runeset I totally despise that is a card runeset (similar to Tarot) that I picked up because I thought it would be different.  (Boy howdy, it was.)  I’ve been ambivalent on some wooden runes I bought. I don’t know the wood and they don’t seem to have a connection to me.  So, I don’t use them.  YMMV.  Again.

Don’t treat the runes as though they were Tarot cards (they’re not).  That means there is no merkstave (upside down) readings.  We have enough negative implications with some of the runes, depending on how you read them. The rune, whether you pull it out upside down or sideways, or whatever, is the rune.  However, can you read a different interpretation with an upside down rune?  You can do what you like.  I think it’s incorrect, but hey, that’s my interpretation.  Again, YMMV.

This is clearly a Ralph Blum invention, although someone might call me on this and tell me somewhere in yada…yada… lore someone used one.  Pertho is more the unknown rune, so we use that.  Someone always says to use it as a spare.  For the life of me, I don’t know how I would cut into the hematite to replace a lost stone.  I’d probably just rob a stone from another set.

Okay, I’m sure there’s no real cause for this other than learning it this way.  You can read anyway you want, as long as you have the rules settled in your mind and with the runes.

Read as Much as You can on Interpretations

This seems a no-brainer, but I would argue that you need to read as much as you can on the various interpretations of a particular rune. Even when I think I’m settled on an interpretation, I’ll get an odd reading that causes me to go back to the books. 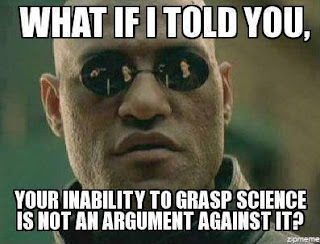 How I Believe the Runes Work

I’m avoiding the M-word when it comes to runes, because I sincerely don’t believe in magic.  I suspect how they work is that they tap into our subconscious which pays far more attention to the world than our conscious selves. I remember having the runes come up with a positive outcome to a particularly difficult time in my life and later discussing them with a physicist friend of mine. He thought they worked because they offered only general interpretation that could fit any circumstance, and yet, I’ve hit the nail on the head more times with runes than not. So, if there’s something else going on, I suspect it’s largely subconscious.  But occasionally I’ve seen the gods intervene in the runes, which suggest maybe they have a hand in tipping the scales, subconsciously, or through quantum means.

Remember what I’ve quoted Arthur C. Clarke so many times about technology being indistinguishable from magic?

Next week, I’ll do a sample rune reading…

Runecasting for Recons (not really)