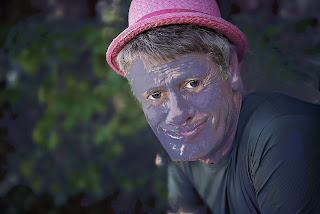 The other day, I stumbled onto a smallish fellow sitting on the hood of my Dodge, smoking what appeared to be hand-rolled cigarette.  His skin was bluish and he wore a stained blue jumpsuit, smudged with grease. It had a name tag which said Bob. He also wore a pink hat.

Normally if I saw someone sitting on my car and smoking, I’d be upset, but this guy was maybe a foot tall, if that.  Blue eyes squinted at me from an impossibly wrinkled face as I walked toward him.

“You’re 1000 miles late on your oil change.”  His voice sounded like gravel crunching under tires.

I halted and stared at him, taking him all in.   A car wight?  Good gods.  And a petulant one, too. Well, at least he spoke English. “Those are guidelines.  The three to five thousand miles are guidelines.”

He glared at me with some disdain. “And when was the last time you vacuumed your car? It’s not intended to haul hay.”

I frowned. “You know, it’s my car, and the goats need hay.  And anyway, you’re not supposed to be smoking, you know.”

Bob, the car wight, grimaced. “Bad habit, I know. Picked it up from my Model-T days. Mike used to keep a pack or two in the old girl and I picked up the habit.”  He glared at me. “You never buy cigarettes, you know.”

“Wait a second.  You were the car wight to a Model-T?”  I considered the little guy.  Did car wights get reincarnated when their machines were crushed and melted?  I never considered the possibilities.

He seemed to follow my train of thought. “Yeah, I hate switching brands, but that’s what you’ve got to do when the cars get crushed.  Then, you don’t have much choice when it comes to recycling.  I mean, you can hang out at the local junkyard for a while, but it gets kinda crowded with car wights, and it’s a rough neighborhood.”

“Yeah, we get a lot of trolls around there.” He looked sidelongs at me.  “You don’t think all the trolls ended up on the Internet, do you?”

“So you don’t hang around the junkyard with your car?”

“They crush them into these really flat pieces.  A lot of car wights don’t bother with them then.  So they hang out and join gangs.  They really like giving junkies and other drug users bad trips.”  He paused and took another drag on the cig. “But they have nothing to do, really.  I’d rather follow my car and see where the pieces ended up.  They recycle the metal, which often means it goes into other things. I lucked out and got a Jeep, a Chevrolet Camaro, and a Dodge.  Poor Jenny got her car recycled into a building support.  Tough luck.”

“I suppose, but it was the frame for a Starbucks, and she’s now wired all the time.  She doesn’t want to leave. The manager keeps accusing the employees of drinking all the coffee.”

“I can see that,” I said.  “So, why have you decided to grace me with your presence?  Certainly not to tell me about changing the oil, or to stop me from picking up a few bales of hay every few days?”

“Well, those are valid reasons,” Bob said.  “And don’t forget the cigs.  But I thought I’d show up since you’ve written two pieces about us.”

“About you?  You mean the car wights?”

“Car wights.  We really don’t exist.  Just ask the recons. Their arch-heathens wouldn’t have believed in us, so therefore we can’t exist.”

“Then how do I explain you?”

He shrugged and took another drag on the cigarette.  “Hey, you claim you’re the rational one.  You tell me.”

“Good point.”  I considered the little guy. “Suppose I said I don’t believe in you?”

“Are you trying to prove a negative?”  Bob chuckled. “You could say you’re delusional, and in which case, you might be right.”  He paused.  “But no.  Try again.”

“But the burden of proof is on the person who asserts it as truth,” I replied.

“But you see me.  You talk to me.  That means I’m here.” Bob flicked the ash away from his cigarette.

It was my turn to look askance at him.  “I don’t smoke.  Remember?”

“Good for you. Don’t start.  It’s a nasty habit.” He pinched the cigarette out with his fingers. “So, since you can see me, you can tell the naysayers out there that there are car wights.”

“They won’t believe me.”

“Who else would hang out with a Ferrari?”

Bob’s eyes held a wicked gleam.  “Guido can talk to their wights. We have a nasty habit of causing break downs at the most inopportune times. Especially when people dis the car wights.” He paused. “Which reminds me, when are you getting the oil changed again?”

Did you know that if you’re getting this free that you’re only getting HALF my posts?  It’s true. You’re missing out on some of my best work, including the series, When the Muse is a Bitch.  Now, did you know that you can get ALL of my paid content for just $1 a post?  It’s true. Which means you pay what it normally costs to buy a cup or two of Starbuck’s coffee a month.  And you get some amazingly good shit.  So, what are you waiting for?  Give a paid subscription to The Rational Heathen and try, and you get some pretty cool perks. Wallpapers, reference material, a separate chat room, and more.  Sign up at Patreon now, and become a patron of the Rational Heathen!

18 Questions You Should Ask Yourself — and the Rational Heathen Answers!

How Skadi Works, or a Dog Story