Welcome to The Rational Heathen!

First post for this blog, so I think I better at least have an introduction and some sort of explanation as to what this blog is about. I’ve been meaning to create a blog about my journey into heathenism and Asatruism, but for a long time, I wasn’t sure what to call it. 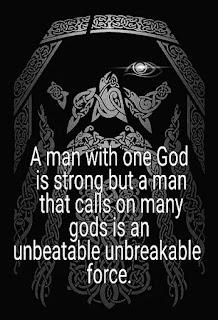 Some Background About Me

My name isn’t really important, but you can call me Tyra Ulfdottir, if you’re so inclined. My religious experience started as a Roman Catholic Christian through my family. I soon became disenchanted with it after reaching adulthood, although I had inklings that Christianity wasn’t for me. For a long time I was unaffiliated, then agnostic, and then dabbled in atheism.  But the gods — and one particular god — wasn’t happy with that, and due to some pretty powerful UPGs (unverified personal gnosis), I was dragged into heathenism. As a friend said “they like a challenge.”  So, they did.

My background is in engineering and science. Basically if it makes no sense logically, I get really annoyed and reject it. I have a really hard time believing in magic, but there may be some equally weird reasons for what we might call magic. Since heathenism does not fly in the face of science, it actually is a nice mix.

Why The Rational Heathen?

I supposed it’s pretentious as Hel calling this site The Rational Heathen. It suggests that I am the lone voice calling out in the wilderness of irrationality, and while that may be true, I have to admit I’m not the only one who thinks logically about things. There are Asatruar who are actually atheists but they like having a foundation in their culture. I am no longer Atheist, so even though I do hold a healthy skepticism about religions, I believe what I believe. You don’t have to agree with me. Hel, you can just take this as the rantings of a mad person.  That’s okay.  Really.  But even though these are my opinions and my thoughts, I have come to their conclusion through logic and reason.  Or, at least I like to think that.

Let’s Get One Thing Straight…

Before I go any further, understand that I am totally against racism and bigotry. I believe that the gods accept anyone and that humans are all one race. That’s right.  I believe what science has shown: we’re all related and we are not different races.  Don’t like that concept?  Get over it. Go somewhere else. Don’t hang out here.  If you’re using the Norse gods to affirm your bigotry, then you have the wrong beliefs.

So, sit back and be prepared to go on an interesting ride. I probably won’t come up with anything earth shattering, but at least I’ll have an interesting time talking about it.

What Draws You to Heathenism?