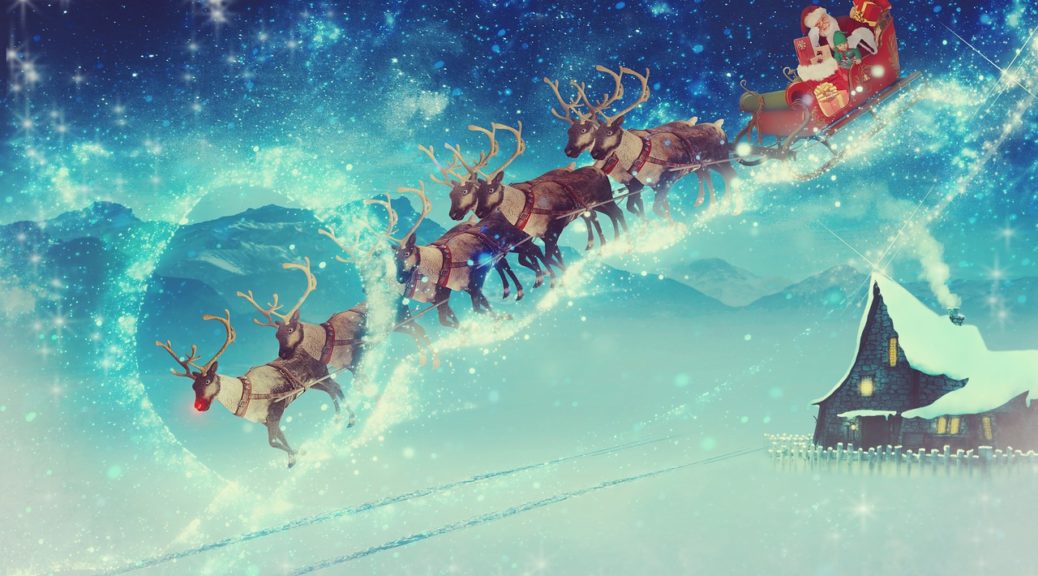 Santa Claus, St. Nicholas, Kris Kringle–when you were young, chances are you were told about the jolly man in the red suit who filled stockings and put presents under Christmas trees on Christmas Eve. Even if you were raised pagan or in another religion, it’s hard to imagine a more ubiquitous figure than Santa Claus. So, it’s somewhat tragic that I stepped on the road to skepticism at the tender age of four or so with the disbelief in Santa Claus.

We pagans love to put our spin on Christmas traditions — Heathens, no exception.  Santa Claus does borrow heavily from the story of Odin and the Wild Hunt, but St. Nicholas was purportedly a Christian saint who was born 280 A.D.

Known for his generosity and kindness, stories about St. Nicholas and his miracles were popular among Christians. Nicholas could raise the dead, save innocent men from execution,  multiply wheat during a famine, calm storm winds at sea, and even had a good throwing arm that most baseball pitchers would kill to get.  Okay, maybe not the last one. But the story below suggests he had to have an arm to throw gold into a chimney.

This Christian saint is reputed to have saved three daughters from being sold into prostitution by providing a dowry for them. He did it in an unusual way.  He threw a bag of gold into the chimney of their house the first night. The gold fell and spilled into the stockings of the women who hung them up to dry by the chimney.  He did this three nights in a row. On the third night, the father discovered Nicholas had done this good deed. Nicholas had the man promise he would not tell anyone how the daughters came by their dowry.  (Never mind this is the most famous story about him.)

Apparently, old St. Nick became quite popular. Christians celebrated feast day, the day of his death on December 6th, with presents given to the poor. (Morbid that one would celebrate a saint’s death. But, that’s the Christians for you.) Saint Nicholas presumably died of natural causes at the ripe old age of 73. Martyrdom is so overrated.

But, the common folk loved the Saint Nicholas stories. Saint Nicholas was popular even in the medieval era, with many people attributing Saint Nicholas to act of kindness, generosity, and charity. Not to mention gifts. The Protestants tried to do away with St. Nick and substitute Christkindl, the baby Jesus, who gave presents. But Nicholas was too popular, beating out the Christ child bearing gifts. To avoid issues with the Protestant church, Protestants called St. Nick Father Christmas. And Christkindl evolved and the name became “Kris Kringle,” thus giving Santa a new name.

By the way, Santa Claus got his name from a corruption of Sinterklaas from Dutch settlers, who stuck with Saint Nicholas even after the Reformation.

But What Does Heathenism Have to Do with Christmas?

Despite St. Nicholas’s obvious Christian roots, Christmas day was the birth of Mithras, a Persian sun god that was popular around the time of Christ and the new Church. The festivals of Saturnalia and Yule were already firmly established. It made sense to adopt these solstice celebrations and make them into holidays to help convert the pagans.

St. Nick took on characteristics of Odin in Northern Europe. Odin rode Sleipner during the Wild Hunt. Children were encouraged to leave hay in their shoes for the steed and Odin would reward them with a gift. In some places, St. Nick rode a horse to give his gifts. It’s easy to see how Heathens could make the connection between the two.

People being people simply adopted Christmas for Yule, but even kept the Yule name. In places where Thor had been popular, the Yule Goat became popular, and even pulled St. Nick’s cart with presents. The Christmas tree, handed down from Germanic traditions, represents the World Tree to Heathens and obviously a holdover from pagan times. Queen Victoria made the Christmas tree famous when she adopted the Germanic customs. So, as you can see, Heathenism has influenced many of the current Christmas customs.

Unless your parents are hardcore skeptics or complete and utter religious assholes, they allowed you the fantasy of believing in what is commonly termed as make-believe things. We can debate what we consider make believe versus real another day.  When I was four, my sister’s fake enthusiasm for Santa already convinced me, a beginning skeptic, that the guy in the red suit was a lie.  I had inklings that Santa Claus didn’t exist. The logic of so many Santas everywhere you looked didn’t jive with what I saw, and my parents’ explanation that these weren’t really Santa, but Santa’s helpers, didn’t make sense. (Those were supposed to be elves, you see.)  So, the Occam’s razor solution was that my parents were giving me presents and not an imaginary guy riding a sled pulled by eight plus one tiny reindeer.

What Should You Tell Your Kids About Santa?

As Heathens, we’re supposed to be above the whole bullshit lies, but Santa Claus is pervasive. If you have kids, they’re going to get an earful about Santa. If you don’t tell them, their friends will tell them, and they’ll be asking you why the fat man in the red suit isn’t stopping at your place. Telling them that Santa only visits Christians makes him look like an asshole and makes you look like you’re following the wrong religion. Trust me on this when I say that sort of thing makes an impression on kids early in life. You don’t want to be the Grinch even if Santa isn’t really our thing.

We can bring Santa Claus’s image back to his Heathen roots of Odin and the Wild Hunt. Telling your kids that Santa Claus is just the Christian version of Odin and that he’s a wintertime spirit who does not care what religion you are will strengthen their belief in the god as being good. (They can learn about the bad sides of Odin later as they grow up.) This isn’t a lie, because Odin really doesn’t care what religion you are and yes, Santa Claus, despite being Saint Nicholas, has taken on the trappings of Odin.

Celebrating Santa at Christmastime is okay. If the kids figure out that you’re the one handing out presents, be honest and tell them that all parents who celebrate Yule and Christmas do that to honor their gods. Santa Claus isn’t a lie–you are the duly appointed gift giver. And if a child hears that there’s no such thing as Santa Claus, the answer is yes, there is, he just goes under a different name.