Reprinted with permission.  Go to Declaration127.com for more information and for a list of those organizations and individuals who agree with the statement.

The Asatru Folk Assembly (hereinafter referred to as the AFA) has a long and well documented history of discrimination on the basis of ethnicity, sexuality, and gender identity. In a recent statement the AFA declared point blank that non-white and LGBT Heathens were not welcome in their tradition. While the undersigned organizations listed here fully recognize the AFA’s right to govern themselves as they see fit, and with full autonomy, we hereby exercise the same right.
We will not promote, associate, or do business with the AFA as an organization so long as they maintain these discriminatory policies.
The AFA’s views do not represent our communities. We hereby declare that we do not condone hatred or discrimination carried out in the name of our religion, and will no longer associate with those who do. We will not grant the tacit approval of silence in the name of frið, to those who would use our traditions to justify prejudice on the basis of race, nationality, orientation, or gender identity.
The AFA is free to stand for whatever principles it sees fit.
They are free to stand alone.
Share 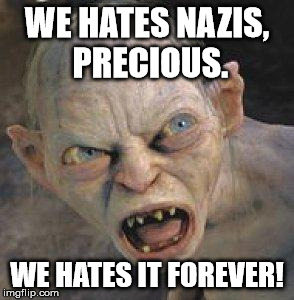 With all the Asatru Folk Assembly crap being flung around, you’re probably wondering what The Rational Heathen has to say.  Well, if you haven’t read my posts before, now is the time.  But I digress…

Before we get started, I must point out that I didn’t mean to insult the Westboro Baptist Church…Oh fuck, who am I kidding?  I most certainly did.  In a stunt that could only be pulled by people of that kind of caliber, the Asatru Folk Assembly, has determined that straight whites who uphold what I can only consider “traditional” Christian roles are allowed in their group.  That means, my friends, that “blacks need not apply” and that LGBTs and other minorities aren’t allowed to join in their goosestepping sessions.  Hel’s bells, I don’t fit the submissive, subservient woman, so you can betcha I am most certainly not welcome.  But I may try to get in just for a laugh and to spy on them until they kick me out.

Can you imagine me on their boards?

We hates Nazis, precious.  We hates it forever!

Tolerance: We’re Not Asking Them to Get Married to a Minority

In the words of the AFA states:

“…we believe gender is not a social construct, it is a beautiful gift from the holy powers and from our ancestors. The AFA celebrates our feminine ladies, our masculine gentlemen and, above all, our beautiful white children…”[emphasis mine]

Well, okay then.  Whether or not you agree with the LGBT lifestyle, whether you believe gender is a social construct or nature, whether or not you choose to marry a person of the color of your skin,  whether you prefer powerful or demur women or men, the reality is that we must live honorably.  That means living to a moral code that honors our ancestors and our gods. We are not judged like Christians are with their god, but we ARE judged by our actions.  Were they honorable? Did they uphold the heathen codes of conduct?

People are many things in this world.  They are husbands, wives, fathers, mothers, Christians, Heathens, Jews, Catholics, Muslims, atheists, daughters, sons, soldiers, doctors, dentists, plumbers, scientists, unemployed, teachers, friends, volunteers, firefighters, EMTs…the list goes on and on.  But the first thing every person is, is a human being. Judging a person by the color of their skin is a stupid, meaningless exercise since we’re so closely related, we’re basically a bunch of inbred primates. In fact, race is a construct. Judging the person by their sexual orientation is beyond idiotic.  If you have cancer, you don’t tell the greatest cancer surgeon that you don’t want him to operate on you because he’s gay.  You don’t ask the airlines about the pilots who fly you somewhere if they are your color or if they are straight.  You don’t stop depositing money in your bank account because the teller is Muslim.  Chances are  you don’t even know those facts about those people.  You just hope the doctor is good, the pilots will get you where you need to go safely, and the teller inputs the right information.  Why is this so hard for some people?

Treat the people with respect that are trying to help you.  Treat everyone as the human beings they are and if they prove not worthy of your respect by their actions, you can modify it.  It’s that simple.

The Dirty Laundry — or Toleration for Goosesteppers

It’s no secret that Heathenry has its share of dirty laundry.  Most is in the form of white supremacists and Nazis who think that by worshiping our Northern gods, we automatically cut out other races and minorities. The truth, however, is far from what the goosestepping crowd wants people to believe. The Northern peoples didn’t care about the color of your skin. They were an inclusive group who married into other cultures and fought beside those who considered them allies, regardless of their perceived orientation.  In fact, there were “black” Vikings.  No, kids, we aren’t pure.  Deal with it.

We have plenty of folks in Heathenry who dismiss the white supremacists as not being true heathens, and because they are not part of their kindred they aren’t a problem, but the reality is that if we have one group who tolerates bigoted behavior, it casts a bad light on all of us. You might as well be called a racist or intolerant bigot, yourself. No matter what you think or believe, if the AFA insists that unless you fit their bigoted criteria, you can’t join, you can bet the public and the media are going to color us all in that light.

It’s not enough to say you are against racism, bigotry, and chauvinism.  The fact that AFA promotes those “values” is enough to make you look racist, bigoted, and chauvinistic to the rest of the world.  Because our religion has such small numbers, we can’t afford to have these people among us.

Our Stories Do Not Support the AFA Stance 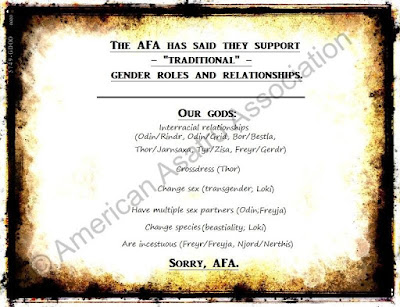 My good friends at the American Asatru Association drew up this little statement that brings our
religion into perspective.  Throughout our stories, our gods and goddesses prove time and again that they don’t behave anything like what the AFA wants to see in terms of traditional gender roles.  Our gods have had interracial relationships, have changed genders, and have crossdressed.   If you need to look for goddesses who are not overly feminine, we can point to Skadi and Freyja. Any women who handle weapons are not “traditional.”

The gods have had children with Frost Giants, Humans, and even a horse.  I am not saying that I approve of incest and bestiality (I most certainly do not), but we can’t point to our religion and claim that there is a basis for exclusion when it comes to people of other ethnicities and other sexual orientations.

Heathenry Should Be Open to All, Not Just White, Heterosexual Bigots 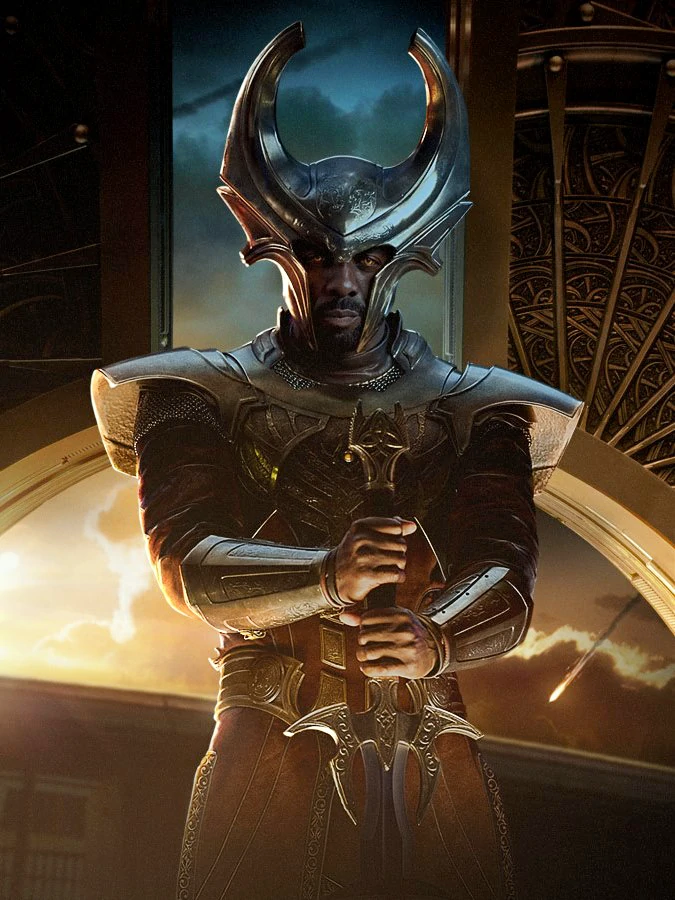 The reality is that Heathenry should be open to all except bigots, whether they are of a different ethnic background or have ancestry from Northern peoples, whether they are gay or straight, or whether they are crossdressers or dress according to whatever custom society expects. I have often said that we need to keep our doors open to everyone, and to make Heathenry a big tent, whether or not the person is of a different skin color or ethnicity, whether they are LGBT or heterosexual, and whether they have beliefs that shift toward Wiccan and Recon. There are places for these people within Heathenry.  Opening our doors to those who are different, but are not Nazis or white supremacists, means that we allow our religion to thrive and grow.  Staying in lock step with those who would exclude them makes absolutely no sense.

At this point, I applaud those groups who have taken a stance against bigotry and chauvinism.  While I don’t necessarily agree with all their beliefs, I must say that they are awesome groups who are willing to stand up against what is obviously wrong.  To the Asatru Folk Assembly, I would say that if you insist on being bigoted and upholding false, and ultimately Christian, beliefs by insisting on being racist, misogynistic, and homophobic, then I denounce you.  You are not Heathens, even if you claim to worship our gods.