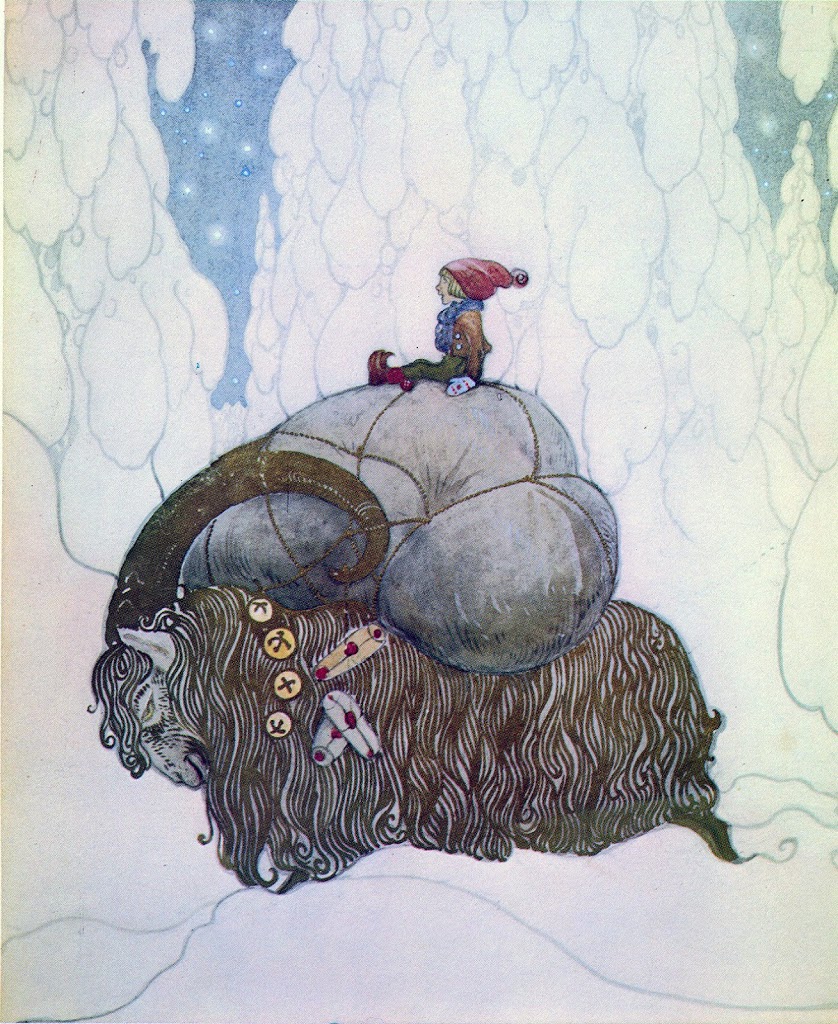 If you’re new to Heathenism, or even if you’ve been a Heathen for a while, you may or may not have seen the Julbock or Yule Goat as part of the Yule celebration. The Yule Goat or Julbock is a pagan Scandinavian tradition that predates Christianity that sneaked into Christmas celebrations in Scandinavia. It’s an interesting tradition that we can easily incorporate into our Yule festivities.

You may be wondering what the Yule Goat is and what significance it has for Heathens. After all, a goat is a goat, right? Well, maybe.

The Julbock is associated with the last sheaf of grain harvested, which in the past was considered to have magical properties. Called the julbocken, it was associated with proto-Slavic beliefs with the god of the harvest and the fertile sun, Devac, represented by a white goat. It was common for someone to dress up as a goat and demand presents as offerings. In this way, Yule was part of the harvest festival that has been carried into the winter solstice, perhaps as a way to entice the sun to return by paying tribute. Historians think the Yule Goat may be linked to Thor’s goats, Tanngrisnir and Tanngnjóstr  in many respects.  Given that Thor provides rains and Sif, his consort, is the goddess of grain, you can kind of see the relationship and symbolism.

The current Julbock appears in Scandinavian tradition as straw tied with red ribbons in the shape of a goat. The Gävle Goat is Sweden is probably the best known Julbock since 1966.  Not surprisingly, it has been vandalized by arson at least 36 times and has been hit by cars, kicked to pieces, and stolen.  Apparently it is too big of a temptation to not offer it to the sun.

In the past, the Julbock kept watch to ensure the Yule, and later Christmas, preparations were done correctly. It seems to be a benevolent Krampus in that respect.  In medieval times, the Julbock was associated with wassailing, playing pranks, and performing plays.  Youths in costumes would go house to house singing and performing plays for food and spirits.  These plays would often feature a Julbock in them.

In the 19th century, the Julbock was the bringer of presents before the whole Santa Claus thing took hold in Scandinavia.  An adult male relative of the house would dress up as a goat and hand out presents.  This eventually faded out as the Santa Claus tradition took hold in the latter half of the 19th century. Even so, there is at least one piece of art showing a rather pagan Santa Claus riding a goat. This artwork is entitled “Old Christmas” which gives us an interesting mix of the two traditions.

How to Add the Julbock in Your Heathen Celebrations

Now that you know a bit about the Julbock, you may be wondering how to add it to your own Heathen celebrations.  Unless you’re a farmer, chances are you don’t have the last bundle of wheat from the harvest, so you may have to be satisfied with your own Julbock decoration or even these nice Julbock Yule tree ornaments.

But you don’t have to stop there with relegating the Julbock as a Yuletide decoration. If you have a large party on Yule, you can add your own Yule play which includes the Julbock.  Celebrate Yule by wassailing.  When it comes time to handing out Yule presents, who says you wouldn’t look marvelous in horns and a goat hide?  Many cool possibilities here.

So, those are my thoughts on the Julbock.  Maybe you have some ideas for celebrating Yule that I haven’t mentioned.  Let me know how you incorporate the Julbock in your Yule.

—
Disclaimer: I’ve included some links to my affiliates in this post where I may receive a small percentage of compensation from your purchase. If you’re planning on buying ornaments or your own Julbock and enjoy this blog, I would encourage you to use my affiliate links.  The money helps support this blog.  Thank you.

When the Muse is a Bitch, or How I’m Surviving the Holidays

An Undercover Heathen around Christmas