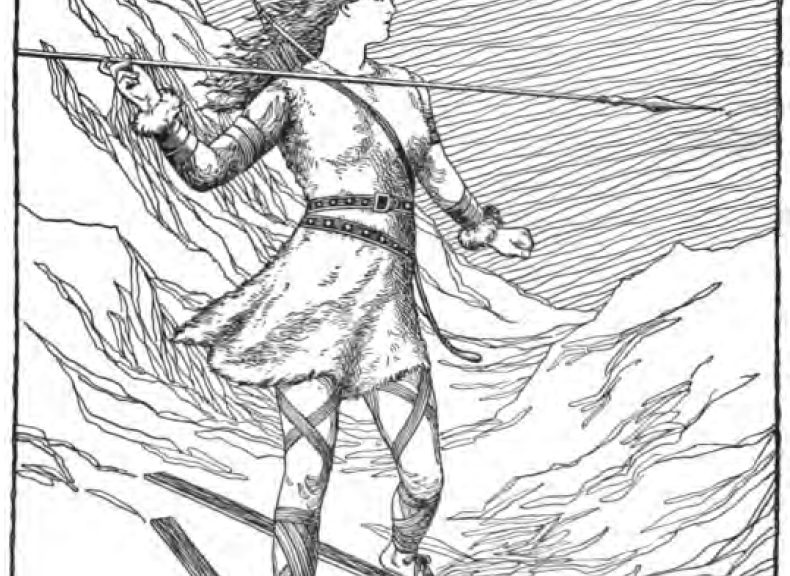 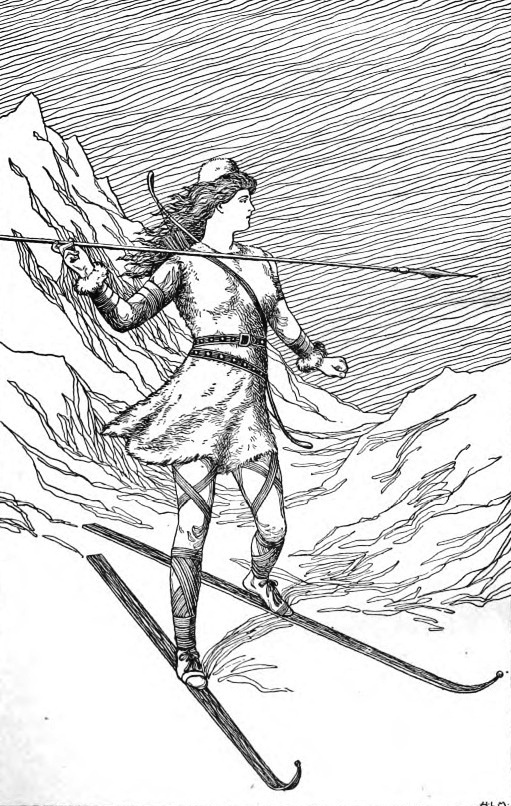 I’m pretty much what most people would consider close to a subsistence hunter. There are several reasons for this, including the fact that I live in a state where I can hunt nearly year round.  Lately, I’ve run into what can only be considered a goddess’s sense of humor.

My Relationship to the Goddess

Most of my life I’ve spent outdoors and in cold weather because, quite frankly, I melt when I have to deal with heat.  Any heat.  Cold and snow has always been my thing. When I went out in the forests in the past before I became a heathen, I could feel something there.  Something powerful and something that could be dangerous.  That pretty much describes Skadi.  You respect the goddess and she’ll let you live another day.  Don’t respect her and you’re dead.  Even those who have a healthy respect for her can screw up and end up frozen to death, buried in an avalanche, drowning under the ice, or eaten by a predator.

Yeah, you better respect her.

I’ve had a healthy respect for her for years, but she can sometimes surprise you with unexpected things. For example, our success in hunting is directly related to her graciousness — and the kindness of the wights. We always be sure to thank the animals we kill and apologize that we must do this to eat.  I sometimes leave little offerings for the wights in that area as a thank you.  I wish I was better at this, so I need to do that more often.

Skadi can be a bit of a capricious goddess when it comes to hunting. For one thing, it’s tough to ask her to send animals your direction.  When she does, it’s amazing.  The animal will actually wait for you to kill it.  Now, you may think I’m bullshitting you on that, (I would), but I’ve seen it now at least four times, and maybe more.  Most of the time, she blesses my husband with such animals.  (I personally think she likes him better.)  But recently, she gave me a turkey which I shouldn’t have been able to shoot, and when I hit him, he could have run off, but instead waited for me to finish him.  (When I dressed him, I found that the shotgun load had broken a wing, but didn’t do any other damage.)  You see, turkeys are fast runners as well as fliers, so having one wait for me was pretty amazing.

Now, you may say the goddess had nothing to do with that.  You may be right.  Maybe animals just wait to get killed.  But I kind of doubt it.  So, I thank the wights and the goddess for the game and feel good about the hunt.

Sometimes even I forget the basic rule: The Gods are Not Your Bitches. But to be honest, hunting isn’t exactly the easiest thing to do. Animals tend to make themselves scarce with people around, which means locating them can be problematic.  I’ve looked over the statistics for our state and hunters maybe fill around 8 percent of their tags.  That counts all animals with a tag taken, not just deer or elk.

Hunting also means you abide by a set of artificial rules.  You can’t hunt on private property without permission, you can’t hunt at night, and you have a certain season you can hunt.  The type of game is restricted, such as males or females, age, and how you can harvest your animal.  Basically it’s enough to drive anyone who isn’t familiar with it all insane, which is why it can be a bit problematic when you have the goddess’s attention and try to explain what kind of bear you want to hunt, why you can’t bait them or hunt at night, you can’t hunt a sow with cubs, and sure as shooting, you can’t shoot the bear she dropped in your lap in the middle of a public road. (Yes, this did happen to us.) The goddess delivers, just not always where you need it. I suspect it is her sense of humor for having to endure my litany of conditions. (At this moment, I have a vision of Skadi peering over the 2016 hunting guide and frowning perplexed.)

At the end of the season, I should give the goddess the hunting guide as a burnt offering in my woodstove.  No doubt she’ll find the reading pretty strange.

The Wights and Hunting Whenever we go to hunt, I can usually get a feel for the area.  I understand that even though I’ve never seen wights, I do get a sense of the “mood” of the land.  In most cases here, I can feel the overall mood and decide whether the wights are positive or not. The places we’ve hunted so far have had some amazing feelings.  The land is awesome; the animals, if we see them, are usually great. I’ve had deer come up to me within 20 yards regularly while we were looking for elk. As much as I would’ve loved to have shot them, the deer season isn’t upon us, so I have to just admire them.  We’ve been lucky and found animals we’ve shot due to either the wights or Skadi, herself, when we pretty much thought the animal was lost.

There have been places where the land felt wrong, no doubt due to the wights there. Luckily where I now live most of the wights feel more welcoming than anything, which amazes me.  It may be just me and those who can feel them, or it may be that they are more open to humans.  I don’t know.  I do know that I offer the local wights eggs and milk to them frequently, and they seem to like that.

My husband and I have been hunting a long time. We love nature and we love animals, but importantly, we love the meat we get.  We’re not particularly interested in antlers, mainly because you can’t eat those, but we won’t turn down a trophy buck if he walked out in front of us. I think that Skadi approves of that, simply because it is respectful.  We try to use most of the animal and give back into nature that we can’t use.  Overall, it has served us well.

Hunting, Gathering, and Being Heathen

I think that many people have lost their connection with nature and the natural order of things. Some of being a heathen means that we should keep the connection to the land and nature the way that our ancestors did.  As a hunter, I’ve had to learn to read animal signs and tracks, know how to stalk an animal without my scent giving me away, and of course, locating the beast we’re looking for. I’ve been getting better at identifying edible plants as we hunt and learning to gather them for food.  It’s a delightful skill, and one that I feel the pleasure from those wights around me when I recognize the bounty they have offered us.

When I look at what we do versus those who sit and analyze the dusty tomes, hoping to glean a bit of truth, I know that my path is more fulfilling in a lot of ways, at least for me.  Yes, there are those who cannot do what I do on a daily basis, due to where they live, but there are many ways to get in touch with our world.

Some Suggestions for City Folks

Look, I spent my childhood and adolescence growing up in suburbia.  Even so, I spent an inordinate amount of time in the forests near my home back when parents didn’t worry so much about where their kids went.  (Somehow, we survived.)  Anyway, I’ve been to the big cities like New York, Washington DC, Los Angeles, and Chicago, so I get the problems you people have.  So, here are my suggestions to help you get a little closer to nature.

These are some ideas off the top of my head.  Maybe you have other ideas on how you can become part of the natural order.  I certainly don’t have all the answers, but you can always talk to  me about it and give me your ideas as well.