Scientists Trying to Determine if Blue-Skinned jötnar is missing link

1 April 2016 — Reykjavík, Iceland. Icelandic Archaeologist Þórhallur Hárlaugsson PhD discovered the body of a 20,000 year old, 5 meter tall, blue-skinned man that Dr. Hárlaugsson claims must be a jötnar or giant as mentioned extensively in the Prose Edda, the Poetic Edda, and Norse mythology.

“I was looking for Huldufólk near the Eyjafjallajökull glacier and tripped over a boot,” Dr. Hárlaugsson says. “I didn’t expect to see a jötnar this far up the side of a volcano, but there it is.”  Dr. Hárlaugsson then called his team to the site and they began carefully excavating the find. So far, the archaeological team has uncovered the head and shoulders of the jötnar as well as one foot.  “It’s remarkably well preserved.  I’m guessing that it died from the blow to the side of its head. It looks like it was hit with a hammer or something.”
Dr. Hárlaugsson speculates that the hammer strike might have been done by a great warrior, who may have given rise to the myth of Thor, the thunder god. “It was probably a great warrior in Iceland.  Maybe an Inuit,” he postulates. “There’s no way it could be Thor.  Nobody believes in those old myths about gods.  Those people you hear following pagan gods, well that’s just silly. They’re doing it for tax exempt status. There aren’t really gods.”

“Don’t be Dissing the Huldufólk“ 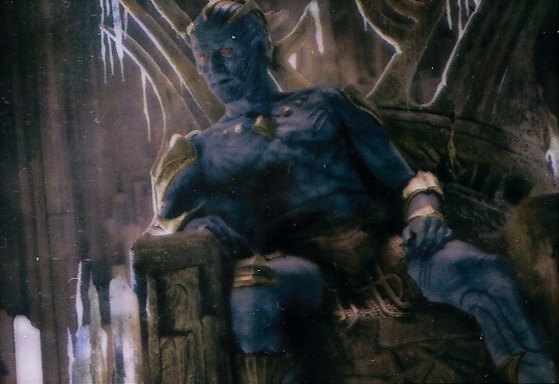 When asked about his belief in Huldufólk and jötnar, Dr. Hárlaugsson became emphatic. “Don’t be dissing the Huldufólk.  My grandmother saw one once out of the corner of her eye.  You saying my gramps is a liar?”
When asked about the jötnar, Dr. Hárlaugsson’s interns put down their pipes and swear that the jötnar is real, even when asked why the photo looks remarkably like a Marvel jotun.
“This is simply amazing,” said Kolbrún Birgisdóttir, an intern with Dr. Hárlaugsson, who asked that she remain anonymous. “I never thought that Marvel was right, but I guess this proves they’re ‘jotun.’  It’s like they were psychic or something.“

Dr. Hárlaugsson believes that the jötnar may be one of modern day’s ancestors.  “I can totally see them having sex with Denisovians,” he said.  When pointed out that Denisovians have only been found in Asia, Dr. Hárlaugsson waved his hands.  “Denisovians!  Neanderthals!  They’re all the same.  Next you’ll be telling me that Adam and Eve really didn’t exist!”