Some days I get a wild hair and start looking for way cool things. It just so happened that I came across this site that had the song, Blue Monday, played on obsolete 1930s instruments.  Now, even though Blue Monday is technically from my era (oh gods, did I admit how old I actually am?), I never was fond of the original, but I do like this version.  Anyway, the site is a listing of tons of free stuff, including free courses.  Now, in my copious amounts of spare time, I actually have more shit to do.  Yay me!

One of the things they do have is an Old Norse course.  Ooooh, I can hear your mouths watering on the link to the class on Old Norse.   They also have Icelandic, but you’re going to have to look for that. Unfortunately I don’t see anything for Elfdalian, which makes me sad. 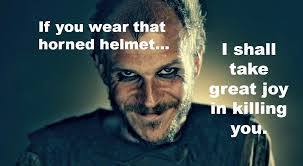 Of course I have to take Old Norse class. This to me is a hat trick for dead languages because I was crazy enough to take Latin in high school and college, and Anglo-Saxon in college.  Working with languages, whether Latin, Anglo-Saxon, Japanese, Italian, or computer languages is really enjoyable.  So, Old Norse makes sense.  Here is the link for it again.  You’re welcome.

If you want to really be a literary snob, learning dead languages are the way to go.  Yeah, they’re cool.  If you want to become a writer, I highly recommend learning Latin, Anglo Saxon, and probably Ancient Greek to understand English better. Old Norse is just my way of learning something that works with our gods, and of course, reading Eddas.

I will possibly be talking about the classes I’m taking for fun as well as my thoughts about heathenism in future posts.  Oh, and the occasional snide scientific comments.

Well, I just saw The Girl Who Died which was Season 9, Episode 5 of Doctor Who and all I could think about were those damn horns on those helmets.  No, no, no!  The Norse didn’t wear horns on their helmets.  This silly idea came about in the 1800s when Wagner’s Ring Cycle came into play (Get it? Get it?) and the costumer designer put horns on the Viking helmets.  And the image stuck.  Rather silly, really.  If you’ve ever sparred with swords (yes, I have) you’d know that helmets are damn heavy.  And if you want to have your head whacked silly, try putting horns on helmets.  While they might catch the enemy’s sword, chances are they’re more of a nice hand hold for your enemy so that they can toss you in the dirt and use a misericorde to put you out of their misery for wearing such a stupid thing. (Yes, I’m very punny today!)

It’s stuff like this that drives me apoplectic.  I really considered the notion of not continuing to watch the rest of the season because of the huge gaff, and because I’m not too fond of the new Doctor.  He’s getting better, but I really miss. David Tennant.  Even then, the Brits have no clue how firearms should be handled and it’s obvious throughout the shows. So I am mentally correcting them throughout.  But that’s for another day.

This goes under: sometimes you can’t make this shit up.  I want to share an experience I had with an old friend who isn’t much of a friend any longer.  (Long story that, in and of itself.)

This friend was a geek and really cool until got married and became “Born Again” because of his wife. His mom, for whatever reason, became Wiccan. I don’t know all the background behind this. At one point, his mom was remarrying and she invited her son and his wife to her wedding.

Now, can you see the mess this is leading up to?

I’m not Wiccan, but I understand that Wiccan can encompass the goddess and god, and a number of other deities. I don’t know what was said as an invocation, but the daughter-in-law thought she heard the name of a demon mentioned.  (Look, I have no fucking idea — I heard this from the son.)  So the son and daughter-in-law turned with their backs toward the mom on her wedding day.  No, they didn’t just leave. No, they didn’t try to understand what was going on.

Sometimes karma is a bitch. What warped god came up with slamming those two together?  I’m thinking Loki — it has all his earmarks on this.  It is funny in a warped sense, and it is tragic at the same time.  Loki tries hard, but even he loves mischief. So, I really should do a blot to him just for the bizarre humor of it all.

—
So, what in the hel is this post about?  Nothing really.  Sometimes I just write about shit that’s on my mind.  I also wanted to share with you a cool site I thought you’d like. I also had a chance for a Doctor Who reference.