To all my fellow Heathen Americans, I wish you all a happy Fourth of July/American Independence 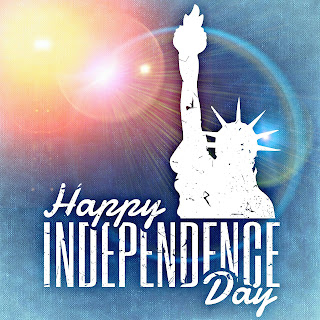 Day.  (For those outside of the US, I’ll admit I’m American-centric.  Deal with it and enjoy the Fourth.)

I’ve been doing some research about America and our Viking roots, and I’ll be talking about a bunch of different subjects over the next few posts.  Why?  Because I can.

If you’re of my generation (talkin’ about my g-g-generation…), chances are you were told Columbus discovered America, and that Leif Erikson may have landed on our shores, but naught came of it.  Columbus was the true hero because he opened the door to the New World for Europeans.  <sarcasm> Never mind those pesky “savages” who lived here for thousands of years. </sarcasm>

When I was old enough to reevaluate what I learned in school, I thought it odd that an entire group of indigenous people were pretty much left high and dry on the “discovery” portion.  I get that our history is largely American/European-centric, since Columbus’ discovery really was the beginnings of the modern colonization of the West.  I won’t get into the whole exploitation of indigenous people, partially because there is plenty of blame to go around in just about any culture when it comes to exploitation, but largely because that’s not what this post is about.

We can say that with Columbus “discovering” the New World, it opened the door for colonization on an unprecedented scale. Although Leif Erikson did indeed “discover” Vinland, and the Norse did have at least one colony at L’Anse auxMeadows, and possibly more, the Norse were without gunpowder and were too few against the indigenous population. I suspect the colonization of the Americas happened not because the Europeans were wiser or had the Christian god on their side, but rather, because by the 13th Century, gunpowder was being used in Europe. (Never mind the Marco Polo connection–but that’s for another day.) 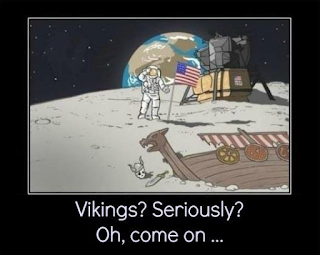 It’s tempting to say that Leif Erikson was the first European who “discovered” the New World, but that could be very wrong.  He certainly wasn’t the first human to discover it. We know that humans came across the Bering land bridge at somewhere around 13,500 years ago from Asia to the New World.  Scientist think a few thousand people managed to get in on the ground floor before the ocean rescinded its offer.

Beringa, or the Bering land bridge, appeared sometime just as the Last Glacial Maximum was ending. 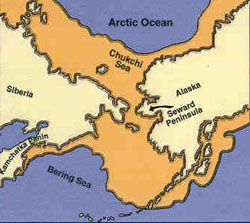 During a couple of thousand years, human migrated across the land bridge before the glaciers had melted enough to finally submerge it. People, being the resourceful hominids that they are, found the New World to their liking and stayed.  Or perhaps when the ocean finally reclaimed Beringa, they discovered there was no going back. These are indeed the first discoverers of the New World, according to modern theories about how humans got here.

However, there is the possibility that people showed up some 20,000 years ago from Europe during one of the Ice Ages when much of the world’s water was locked up in ice.  Called the Solutrean Hypothesis, it’s considered controversial because most archaeologists believe that the Americas were devoid of humans until 13,500 years ago.

Solutreans and their Tools

The Solutreans were a group of Stone Age peoples who lived in Europe. The claim is that the Clovis people were actually Solutreans who came from France at that time.  There are similar tools in France that look like Clovis points. The 20,000 years ago marker was arrived at when a stone ax was dredged up along with mastodon bones in the ocean off of Virginia’s east coast. Solutrean proponents claim that the ax and bones were linked and the bones were found to be 20,000 years old.  A carved mammoth tusk in Florida which dates to 13,000 to 20,000 years might also be of Solutrean design.

So, What Does That Leave Us With?

We know that humans got to the Americas through the land bridge.  That’s been pretty much established. Whether they were the first humans to discover the New World is up for debate. There is sketchy evidence, at best, but it’s hard to prove a negative and say definitively they were not there. Most scientists stick with the migration after the Last Glacial Maximum because the evidence supports it.  Could there have been a crossing from Europe to the Americas?  Maybe.

I’m not going to say it happened or it didn’t, because I just don’t know.  It is an intriguing idea, certainly, because humans are infinitely adaptable and are capable of moving around damn near everywhere.  One thing we can be certain of is that today is the American Independence Day, and you need to be careful if you’re lighting off fireworks.  So have a safe and happy Fourth of July.