Well, it’s harvest time.  Today I was preserving some peaches I received from a local farmer, and it occurred to me that most people really aren’t in touch with their food.  Oh sure, you go to the grocery store and buy stuff.  Maybe you plant a small garden, if you have the space, but many people don’t.  So, you buy your food from who knows where, and pray to Freyr that maybe he’ll accept your thanks.

Kids, we need to talk.

Let’s get one thing straight: I like PopTarts as much as the next person.  They’re great junk food, but they’re not what harvest is about.  (Actually I don’t eat PopTarts; I’ll eat the organic “toaster pastries.”)  Anything that is over processed really isn’t great for you.  I would argue that the more processed the food is, the farther away from you it is, the more chemicals added, the less healthy and the less nutritious it’s likely to be.

I also think that if you don’t pay much attention to where your food comes from and what goes into your body, you need to rethink your commitment to being Heathen.  You may argue that where you get your food doesn’t matter, so I guess I’m going to try to reason through this.

Our Ancestors Were Farmers

When we talk about Freyfaxi and Harvest celebrations, we’re celebrating the harvest and thanking the gods, particularly Freyr, for the bounty. Most of our ancestors were farmers at one point, and if you go back far enough, they were hunter-gatherers.  In all human history of some 200,000 years when homo sapiens has been in existence, people have been in touch with the land and nature until very recently. You could argue that the first cities emerged in 4000 BCE in Mesopotamia, and while that was very long ago, when you consider humans have been around 200,000 years, we really haven’t been in cities that long.  What really started separating people from agrarian life was the Industrial Revolution in the 18th century.

Now, I am not a Luddite against progress, but the Industrial Revolution started moving people

wholesale off the land and toward factory work. As a result, many people lost their ties to the land.  They forgot important things such as how to read the weather, track animals, or know how to plant a good crop. There were still farmers, but many ended up being forced into a monoculture type of growing (where you only plant one cash crop.).  The Irish learned the hard way with the potato famine that planting one species of one particular crop can be dangerous.

Monoculture and Why You Should Care

After WWII, we started moving away from small farms as corporations bought up farmland that was owned by families for generations. As a kid, I remember seeing my mom distressed to see oil company logos on farms (no doubt due to hedging the bet that ethanol would become an additive to gas.) What we didn’t see were all the farms that went under and got snapped up to plant certain monoculture crops.  Monoculture, as it pertains to agriculture, is growing or raising the same type of species or subspecies because it produces high yields, is pesticide resistant, or is better performing than what is called heritage crops.  The problem with these crops is that they have no genetic variation, and thus simple to wipe out with a blight or disease. Many of them are, in essence, clones.  Clones aren’t harmful to you, unless there is something wrong genetically with them, but the lack of diversity increases the chance of a serious famine.

That Chicken (and Pork) Contains Arsenic

The problem with our food system isn’t just that its monoculture.  The big farms often use chemicals to enhance yield.  In the case of chicken, pork, and turkey, the big farms used a chemical call roxasone which is an arsenic-based drug used for treating coccidia in animals. Chickens almost always have coccidia, as do a number of other animals, but there are other treatments available that do not have the same ingredients.  It is common for industrial agriculture to just feed these chemicals all the time in the food to ensure that the animals are coccidia free. A study that was published on the National Institute of Health site shows that the amount of arsenic in chicken meat is substantially higher than chicken that were raised organically.  This study caused the FDA to remove approval of 98 of the 101 arsenic-based additives that go into food.  Incidentally, another arsenic-based drug is allowed in turkeys, and with three chemicals still at the industrial agriculture’s website, you can bet this is still a problem.  The conclusion of the study was:

As an aside, Snopes.com, which usually gets things right, has this somewhat misleading title. While 70 percent of the chicken in stores may or may not have elevated levels of inorganic arsenic, the actual study showed that half of the conventional chicken tested positive for roxasone in the study and that the roxasone decreased while inorganic arsenic increased. The study suggests that an additional 3.7 people in 100,000 could be exposed to enough arsenic to cause bladder and lung cancers.

Why Being Self Sufficient is Important for Heathens (and 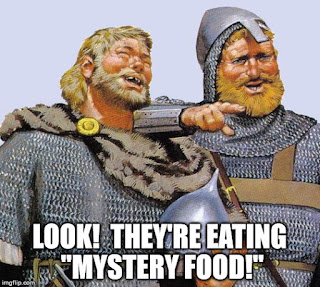 As a semi-subsistance hunter, I look at the way foods are produced and ask myself how this is good for the land, the next generations, and for myself.  I’m not a rabid environmentalist, but even I realize that we can’t sustain our current conventional growing and farming methods.  This is not a healthy way, nor is it a way I could imagine any god would approve of.  So if you’ve celebrating or are celebrating Harvest Home, Freyfaxi, Thanksgiving, or another harvest tradition, look at what kind foods you’re being thankful for.  Are they from our fields and woodlands, neighbors, or local farmers, or are they from big industry agriculture and maybe halfway around the globe? In the first case, you have connection to your food.  Maybe you know the farmer whom you bought the peaches from (like I do), or maybe you grew an apple tree in your yard and you’re canning apples and baking apple pie.

Being Self Sufficient isn’t Easy

While it’s incredibly hard in this age to be truly self sufficient, there are many things that you can and should do, even if you live in a city.  Maybe you have to rely on someone for most of your food.  Do it responsibly.  Here are my suggestions:

Hopefully, I’ve given you ideas how to make a difference and respect our land and our gods.  And next year, you’ll feel closer to our gods because you participate more closely in the cycle of life.