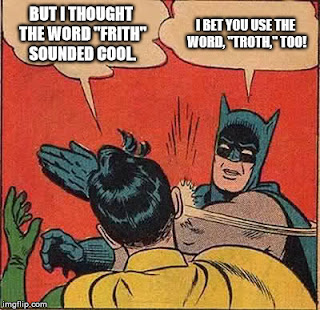 “Frith” and “Troth.”  If you hang around with Heathens and Asatruans, inevitably you hear those words.  Those silly, archaic, bizarre words.  Every time I see those words, I want to roll my eyes and sigh.  Or laugh.  Or puke.  Or something.  It’s not that I disagree with the concepts, per se, I just have a tough time with silly archaics.

And I know at least two “dead” languages.

What the Fuck is Frith and Troth?

First, I need to get the definitions out of the way to ensure the recon rabble will find something to argue or poke fun about.  So, let’s look at frith.  My understanding is that it is tied to the “inner yard” or Innangarth which makes up the kindred.  If you look it up under Wikipedia (and you recons are welcome to fix their definitions, by the way), it points out a state of peace that has to do with relationships. Frith encompasses fealty to lords as well.  Basically, it is peace that occurs to those who belong to a certain unit, let’s say “family.” But family is more like The Godfather’s family — extended and has those who must swear loyalty of some variety. When you’re offered sanctuary, that’s frith working.  Got it?

Troth is loyalty and truth.  If you look up the word in Merriam-Webster’s, you’ll see loyalty or pledged faithfulness.  Basically, it’s an archaic term for “truth” or “oath,” depending on its context. 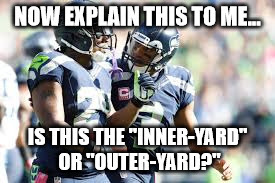 So Why the Fuck do I Have a Problem with them?

Other than the names and usage instead of modern English, you probably are wondering what is wrong with using them today.  Glad you asked that.  I’m going to address the whole Innangarth/Utanngarth and the concept of frith (crap, I keep typing “firth” because my mind and fingers rebel against this silly word.)  Basically, the idea comes down to an early form of feudalism that we got away from a long time ago.

Let’s talk frith.  Back in the olden days, you had to have scores of relatives, friends, and whomever else in your Inner-yard because, quite frankly, the world was a dangerous place (it’s still dangerous, but not quite that level in Western societies) and if you didn’t have allies close at hand, you had everything taken from you by force.  Warfare was common back then, and it was the equivalent of living in street gangs, but without police to really turn to.  It’s no surprise that I likened the Inner-yard to the Mafia in the Godfather.  Hels Bells, where do you think the Sicilians learned this behavior?  Try the Norse and the Normans. There’s a reason why there are red and blond Sicilians.

“But Tyra,” you say, “we’re using frith to mean a safe space for our family and friends.”  I would argue that that’s fine, but be aware it is much different than the historical frithering something or other.  Yes, it can evolve over time — I’m not as pedantic as some — but change the term.  Tell us what it is.  “Safety,” “Safe space,” or whatever.  You’re using an anachronistic word here. 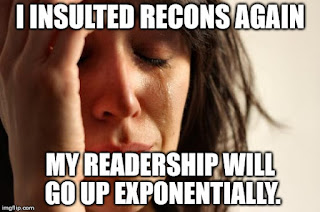 Frith, like many things, is conceptually an attractive idea, but in the end really offers a lot up for abuse of power.  People swear fealty to that particular lord and support him.  Peace (lack of warfare) occurs between members, though there are always disagreements.  Basically, you trade your loyalty for protection.  Feudalism, to sum it up succinctly.

I grew up in a Frith-type household.  It sucked.  Not because of any physical abuse (although I could make the case for verbal abuse), but because there were things you never went to the Utanngarth over.  And quite honestly, there should have been more Outer-Yard interaction.  There were too many “secrets” that shouldn’t have been, and too many issues that later on caused problems that could have been addressed early on and avoided.

By the way, the Heathens of old weren’t the only ones who had the concept of Inner/Outer-Yard.  That concept is alive and well with the Japanese and other Asian ethnicities. In fact, the Japanese have one set of words for family members that are only used among family members versus a more formal set of words for “outsiders.” In many ways, Heathen culture mimics Japanese culture and Shinto: concept of inner/outer yard, ancestor worship, local kami/wight worship, female sun goddess, highly ritualized ceremonies with drink, warrior class which required fealty for protection, thegns/daimyo…I could go on and on.

I can see Frith being used as an excuse to hide addictions, sexual abuse, law breaking, and other terrible things, because it’s all too easy to insist on loyalty for “protection.”  Look at how feudalism was abused.  Look, our ancestors thought it sucked enough to get rid of it.  Now, I can hear the recons arguing with me on this.  Guess what?  I don’t give a shit.  The fact that it CAN be abused, suggests it WILL be abused.  Power, my friend, corrupts. 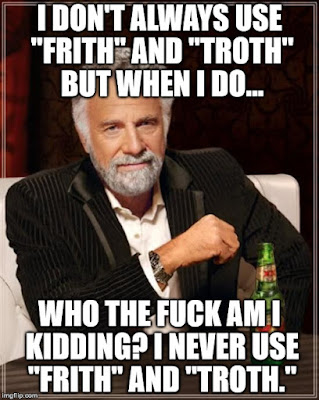 Being a follower of Tyr, I do have some thoughts about Troth. You may guess by my crazy blog posts I tend to be a little on the brutally honest side.  Being honest and forthright is best, In My Not So Humble Opinion (IMNSHO), but I am quick to avoid oaths.  Oaths are solemn things, and yes, the gods will hold you accountable to them. So, swearing loyalty, except maybe in marriage, scares the bejesus (heh!) out of me.  Fail that oath, and you’re dealing with an ugly situation both here and in the afterlife, such as it may be.  Plus pledging Troth to anyone in terms of fealty, takes us right into the (not so) good-old-days of feudalism.

So, Where does that Leave us?

By now, I can feel all the recon rage.  Look, I really don’t care if you frither and troth all you want. I get the concepts, and I get you want to go back to the Bad Old Days.  Or maybe you think you can do a better job incorporating them into your family, kith and kin. Far be it from me to tell you how to live your life, as long as it doesn’t affect me. I’m not saying don’t respect your elders, and don’t respect your family, but families aren’t perfect, and no matter how much you’d like your Hof, Kindred, or whatever you call your group to be, to be perfect, it isn’t going to be that way.

I’d argue too that our Inner-Yard versus Outer-Yard has grown substantially. One could make the argument that our Inner-Yard encompasses our community, our state, or even our nation.  I haven’t gone so far as to say it encompasses our world, but maybe if we discover other life forms, that might be a real possibility.  (Someday, I’m going to write something about if Thor is on other planets, but this post is long enough.)

Anyway, use frith and troth around me, and I’ll laugh.  If for the silliness of the words, if nothing else.