If you’ve been following my blog, you know what I think regarding Christ. But you may not realize that I’m a bit of an undercover heathen, especially around Christian holidays. There are many reasons for this, most being convenience and a desire to not get into an argument with family members who will not change their minds. 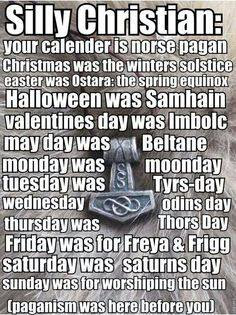 Christmas is really a holiday appropriated from pagans. Rather than try to stop pagan Saturnalia, Solstice, and Yule celebrations, Christianity took the holiday and moved Christ’s supposed birthday to coincide with it. Originally Christmas was even banned in the American colonies because of the pagan origins. In fact, most of the Christmas celebrations we have now were instituted in the 19th century.  Christmas trees were brought over from the Germans when Queen Victoria created Christmas in an image she wanted to see. Charles Dickens created a Christmas mythos in his novels.  Basically what we have now wasn’t how Christmas was celebrated in the past.

The Feast of Yule

The Feast of Juul was pervasive in Scandinavian countries where the Yule log was lit to honor Thor. People lit bonfires to herald the return of the Sun, and those who celebrated welcomed the return of the sun as a symbol that Fimbulvetr, the long winter that preceded Ragnarok, had not come. People who gathered the ashes from the Yule log scattered them in the fields or used them for magic and medicine. In France, some folks kept the ashes under the bed to ward off lightning strikes.

Odin and the Wild Hunt 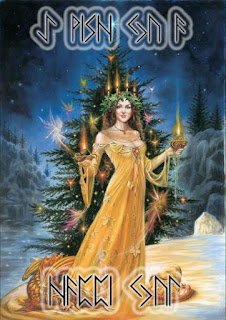 The solstice was considered the closest time when the veil between the worlds was more thinly stretched.  Odin would ride Sleipnir, accompanied by the dead during the Wild Hunt. Children would leave hay for Sleipnir in their boots, and in return Odin would leave them gifts.  Hmm, sounds a bit like another old guy who leaves presents for children. I wonder if they’re related? (If you don’t get the sarcasm here, check out the link first.)

Nowadays, Heathens recognize the twelve days of Yule starting with Solstice or Mother’s Night — the time of the year when our northern hemisphere is closest to the world of the dead. The shortest day of the year even feels magical. Especially up north, you’re more likely to see auroras, snow, and just a more magical landscape.

A Heathen in a Christian Land

For those of you who celebrate Yule, the season is indeed magical. For those of us whose families are mostly Christian, Christmas season can be wearing. I actually do love the trappings of Christmas, because, by golly, they’re Heathen with very little disguise. My thought is perhaps even though we do celebrate Christmas, it’s actually celebrating Yule, and maybe that’s all that counts. I certainly have a special celebration of the solstice as part of the festivities.

So, even though I keep my Heathenism more or less quiet, maybe it doesn’t matter. By celebrating the season, I celebrate Yule.  So, I’m a bit undercover on this. Well, our ancestors were too.  So, from one Heathen, albeit an undercover one, to another, I wish you a most happy Yule. Oh and check out a book by my friend, Josh Heath, who wrote a co